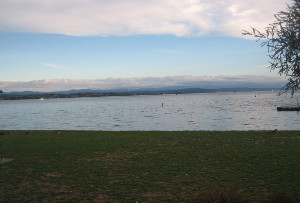 I could wake up before at 7, becuse I went to bed early last night. My thoat had a little heart, however my body had been reviving day by day.

On the other hand, Meer seemed to hard to wake up. He couldn't sleep well last night. He was still in a bed. Uhhnn ? Maybe I know this symptom. After he went out bed, I checked his face was puff up. And he said, "I have a cold." Ahhhh.... He caught cold from me.

We needed to move from park until 9. We still had a plenty time, I advised him going back bed for rest. But his condition became worse over time. Finally he vomited. This symptoms was worse than mine. His face became pale and he had dizzy. That's impossible for leaving  here until 9. The first priority was he get rest. I stayed in motor home as soon as I can, because I worried about leaving here wih him.

Time was passed at 11. He still vomit repeatedly. We were going to friends house in Rotorua today,but it was canceled. Almost motor home left the camping ground until noon. Passing at noon,  some motor homes arrived here. We still parked same place without being warned. 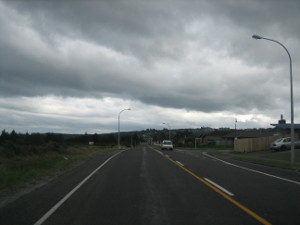 I am worried about him. He vomited repeatedly, but he couldn't eat any food. It deprived his energy. Is he going to revive in this situation ? I recommended to eat banana cause this is good digestive. He could eat a little, and he wasn't get felling nausea. So he tried to eat banana little by little for getting stamina.

Time was close to evening, I decided to stay here again, but Meer wanted to move and took a shower. We couldn't move long way cause his condition, I was looking for some holiday park close to here. Taupo is a famous city for sightseeing. As you know holiday park price is expensive. I could find a holiday park, $ 40 for a motor home with 2 people, and we moved. 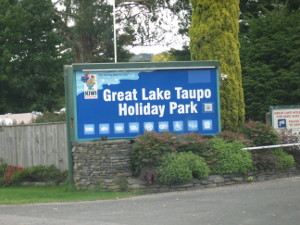 On the way we bought cold medicine, soup and some groceries, we arrived the holiday park.

Even though this holiday park was not so big, facilities were in place and clean. I made chicken cream soup that Meer favorite with surimi. That was succeed he could eat, it was good digestive, and his body got warm.

Since he got stamina and energy, he was supposed to work. I required to stop work and go back bed cause I didn't want him to return of worse. He went to bed at 10 , and I went to bed at 11 pm. I needed to stay in motor home whole day, I was killing time with Youtube. 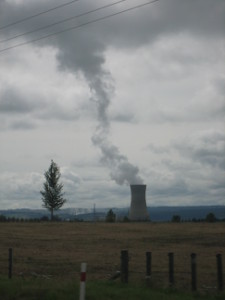 In the morning, I checked his face with worried, Fortunately his face got back ruddy complexion from vampire pale. But he had still cough and need tissue paper. He could feel his condition become better. We decided to go to Rotorua.

Our motor home needed oil change. It was severe if we are driving to Auckland without oil change, we decided to change in Rotorua. After we took a shower, moved from Holiday park, and cleaning the toilet tank at dump station. Then we went the shop that they sell $30 for 5 T-shirts, and got them. Finally we left from Taupo.

It seems like close to Taupo and Rotorua, actually doesn't. Today was Saturday, the oil change shop will be closed at 1 pm, it is earlier than week day. We felt more impatient to be pressed for time. So Meer driving was faster than normal. We arrived at 12;20, it's worth it. We contacted them before, stuff were good at working speedy, so they finished the oil change only for 20 mins. 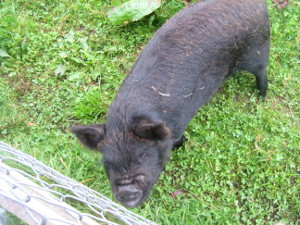 Lunch time after finishing one job. I tried to be looking for St Pierre's sushi shop, I couldn't find again. Moreover other sushi shop price was expensive. I gave up sushi, and we went to super market. However that's not good taste that I chose, I was disappointed a little. Actually it is normal I am failed to get delicious food  when I can not decide eating out.

After lunch, we went back super market again, we bought groceries for bringing friend's house. Meer heard from friends, they like unusual side dish, we chose blue cheese, cheese in paprika etc...,  Even though there was a hot spring spa close to friends house, we went direct their house without going spa.

We already have met their child on January. Even though we played a lot at that time, he backed to be shy. Before dinner we became good friends again. And kunikuni pig is called pineapple, she's changed to big quickly in two months. If I called her name, pineapple came, and require to rub to her stomach. Her gesture was like a dog.  This time another mini pig was added their farm for eating. 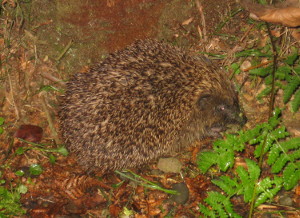 Finally we could visit to friends house on week end. I thought we had a plenty night time. We had pasta that they made and side dishes that we brought.

After child went to bed, we played card only adult. We wanted to stay relax night time together, but Meer was coughing and running nose again, maybe a medicine that he got run out. It couldn't be help, take care of himself.

On the way going back motor home, we found nature hedgehog in friends house garden. My friends caught and release it to farm across from street. Cause don't let their dog catch it. I got a little bit exciting for this experience that we can't experience in urban city. 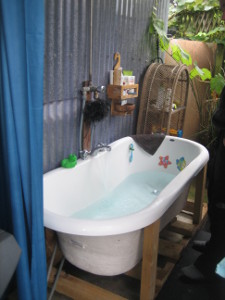 Meer had a lot of sweat during night. It made him feel better. When we went to toilet in their house in the morning, they were going to town for buying groceries. We were going to move from their house for not to give cold to them.
However they worried about Meer condition, they persuaded us, we decided to stay one more night here. And they recommended to take a bath in their house.

We could use hot water used to be, but now we could use only cold water bath in their house. They are making hot water with firewood in garage. And we could take a shower and bath in outside bath tub with roof. Thank you for your kindness, we would like to try it.

We took a bath together. Because it hadn't reheating function, if one person have a bathing first, it is hard to reheat for next. Even though bath tub wasn't so big, just in space for two person if we made space each other. We haven't been taking a bath for a long time. When we put in hot bath, we leaks voice, "Hahhhh....". That's world wide habit. 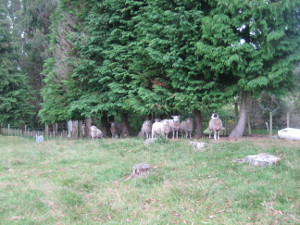 We took look backed this journey that we had a lot of arguments, and talked our future in wonderful bathing time. Passing the fun time quickly, hot water has became warm. in addition it started to rain. We wanted to added hot water, but we couldn't get new hot water cause there weren't enough firewood. Meer tried to add firewood, but we couldn't get hot water soon. We washed our body quickly each other, then we went back the room before body become cold.

Passing at the noon, we had a soup lunch, then friends family came back home with lots of groceries and cold medicine. They recommended Meer go back to the bed. Meer required me to stay in bed together, so I got nap too. It made our body become better, although I had still felt dull.

After we went out bed, they were doing farm job. They spread hay in each animal shed. Their child was good working too. He would be able to getting farming knowledge from his life experience.

We played the boy with his toy, after we felt tired, we had done stretch body for half hour.

We got on a antique car that our friend customized by himself, he drove high speed on the country road. Then his wife and child got off leaving us who didn't know next happen. He started revving up the engine, much smoke covered us inside car. Holy.... Thank you for fun experience any time.

They prepared pita roll for dinner. That's healthy and nutritious. They needed to leave from house early next morning, so they would to go bet at 9 pm. Only child went to bet at 8. They told us their life knowledge more, then we went to our motor home at 8:30.

Although we came their house on weekend, we couldn't get enough relax and fun night time that we expected, moreover they took care of us a lot. We were sorry and appreciated their kindness. 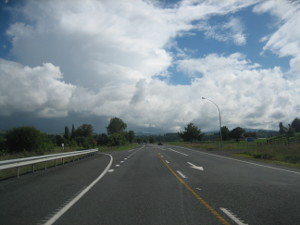 It was heavy rain from morning. I thought they gave up to go out for this weather, when I went to their house for using bath room, I noticed they are already disappeared. Their husband went to job, wife and child went to the friends house for playing together once a month.

Meer recovered his condition that he could admit he is good. We left from their house passing at 9. Cows in farming were eating grass during getting wetting in a rain. That's a little bit miserable scenery.

topped rain, got the sun, and starting rain again. It was famous New Zealand weather is changing quickly. I was surprised to changing sky appearance easily until we arrived at Auckland. It was finished second journey in this year.

The journey of ups and downs, however this journery gave us the chance we got over our problems and make more close to relationship each other.